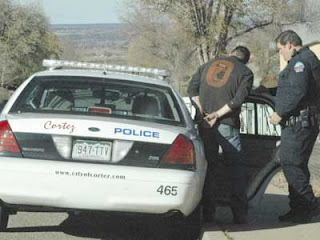 Drugs in the sleepy little town of Cortez, Colorado.

Two Cortez Police Department cruisers rolled down South Washington Street on a sunny fall day, stirring fallen leaves in their wake. With a flash of brake lights, they lurched to a stop and two officers emerged, knocking on the door of a house, where a man in a hat and glasses was arrested.

A block away, a man in a sleeveless T-shirt and a sobbing woman in a white hooded sweatshirt were loaded into a police sport utility vehicle. Their home reportedly smelled of marijuana and a search warrant was issued, recovering marijuana plants and paraphernalia.

On North Washington, a 51-year-old man with short cropped hair was handcuffed and lowered into a cruiser. He expressed frustration at being arrested during a romantic moment.