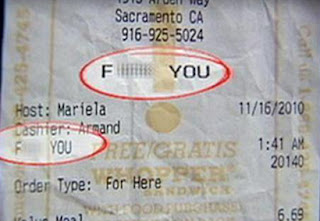 Burger King's F#*# You leads to firings
A profanity laced receipt leads to a firing at a NorCal Burger King.
By LORI PREUITT- nbcbayarea.com

Burger King corporate stepped in and fired two of its employees after a drive through receipt with some choice words made it on national television.

Sacramento resident Francisco Perez told KCRA TV after ordering food at the Sacramento restaurant, he noticed his receipt read "f--- you" in the area that would normally say "thank you."  The four-letter profanity was spelled out not once, but twice.
One day after that story aired, a Burger King manager and an employee have been let go according to a company statement released Wednesday.
"Burger King Corp. (BKC) and the franchisee that owns and operates this restaurant deeply regret that this incident occurred," Burger King's Denise T. Wilson wrote. "The franchisee has taken immediate corrective action and both the manager and employee are being terminated. The franchisee will be reaching out to the guest directly."
Perez told KCRA, as of Wednesday afternoon, if was still waiting for that phone call.
Posted by Sam at 7:32 AM