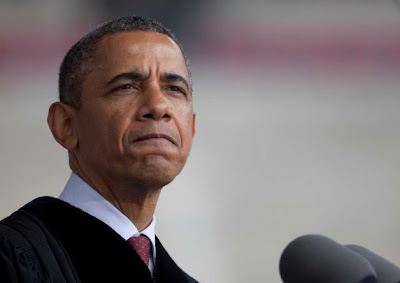 Try leading for a change.

WASHINGTON (AP) — Immigration, guns and national security are dominating the discussion on Capitol Hill, but Americans by and large are still focused on their bottom line. So President Barack Obama is launching a series of quick jaunts around the country to remind Americans he's still got jobs and the economy on his mind.

Obama will kick off the effort Thursday with a trip to Austin, Texas, the White House said. While in Texas, the president will visit a technical high school and meet with entrepreneurs. He'll also drop in on a tech company and talk with blue-collar workers.

The trips come as Obama, less than four months into his second term, is facing increasing skepticism from political allies and foes alike that he still has the clout to get big things done before the 2014 midterm elections creep up and his ability to set the agenda diminishes. Those concerns have been compounded by a failed push on gun control and a similarly unsuccessful effort to avert automatic spending cuts that took effect in March. Obama traveled repeatedly outside Washington to rally Americans to urge Congress to act on both fronts, but with questionable results.