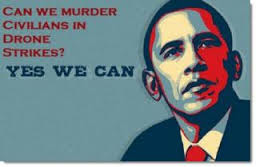 4 Americans killed since 2009 in US drone strikes


WASHINGTON (AP) — The Obama administration acknowledged for the first time Wednesday that four American citizens have been killed in drone strikes in Pakistan and Yemen since 2009. The disclosure to Congress comes on the eve of a major national security speech by President Barack Obama in which he plans to pledge more transparency to Congress in his counterterrorism policy.

It was already known that three Americans had been killed in U.S. drones strikes in counterterrorism operations overseas, but Attorney General Eric Holder disclosed details that had remained secret and also that a fourth American had been killed.

In a letter to Senate Judiciary Committee Chairman Patrick Leahy, Holder said that the government targeted and killed U.S. citizen Anwar al-Awlaki and that the U.S. "is aware" of the killing of three others who were not targets of counterterror operations.