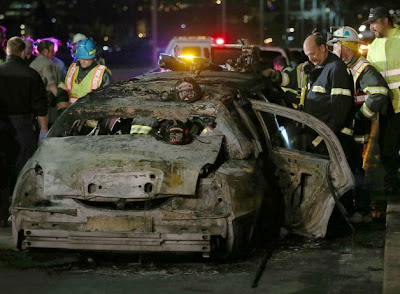 SAN FRANCISCO (AP) — When one of the nine women in his limousine complained about smoke, Orville Brown pulled to the side of a San Francisco Bay bridge to check. As he got out, the back of the vehicle became engulfed in flames.

A newlywed bride and eight of her friends were still inside, but passersby quickly pulled three from the burning Lincoln Town Car late Saturday night. And one woman managed to reach safety by squeezing through the partition from the passenger section to the driver's compartment, Brown told authorities.

But five others, including the bride whose marriage they were celebrating on a girls' night out, became trapped.