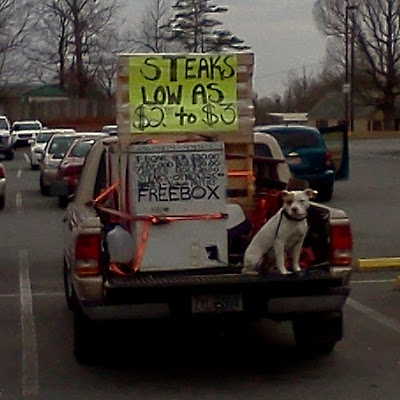 Apparently stolen and in this vehicle.


San Antonio police detained a driver and arrested his passenger after their vehicle — which was found to have a large amount of meat inside — crashed into a stop sign southeast of downtown.

Sgt. Greg Brooks said around 3 p.m. Sunday, police tried to pull over a speeding black BMW on U.S. 281 near Josephine Street. The driver refused to stop, and the passenger reportedly threw a small baggie of marijuana out of the window as the men drove away from police, Brooks said.

Officers followed, and the BMW reached speeds of 120 mph before Brooks terminated the chase near Interstate 10 and Pine Street. Moments later, police were told a black BMW crashed and two men inside it ran away, Brooks said. An officer in an unmarked car nearby spotted the men at East Drexel and Piedmont avenues and detained them; meanwhile, police recovered the baggie and found several unmarked packages of meat inside the car.