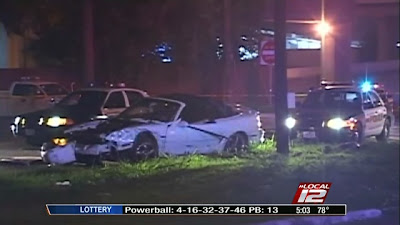 Why you running from the Po-Po?

Now you is dead.

A driver was killed early today during a high-speed police chase on Interstate 10, KSAT-TV reported on its 5 a.m. newscast.

Officers were running a radar unit from the I-10 access road at West Avenue when a Mustang came roaring past eastbound on the interstate at more than 100 mph, the station said.

Two patrol cars gave pursuit, and just as they turned on their flashing lights, the driver in the Mustang attempted to make a quick exit at Frio Street, KSAT said. The first patrol car was too close to the exit to make the turn, and by the the time the second squad car arrived at the exit, the Mustang had slammed into a retaining wall.

The rest of the story: (Links to original article)
Posted by Sam at 8:17 AM