You gotta be kidding 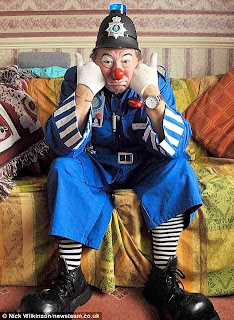 Making the world, and air-travel safe, one clown at a time!

Yes, obviously a terrorist would dress this way to gain access to getting on a plane.

If Dave Vaughan had been a terrorist aiming to wreak havoc in mid-air, he didn't make a very good job of slipping aboard the plane unnoticed.
After all, he was wearing a flashing police helmet, a red nose and size 48 shoes.
But even in his guise as PC Konk the clown, he was not above suspicion by airport security chiefs - who strip-searched him just in case.

The stunned 60-year-old was frisked by guards and ordered to remove his comedy costume down to his shorts and T-shirt after setting off an alarm at Birmingham International Airport.
He was even ordered to hand over his plastic handcuffs as they were deemed a 'risk' before eventually being allowed to board his flight.

Mr Vaughan, a children's entertainer for 25 years, had been booked by Variety Club Midlands to perform for disadvantaged youngsters on a one-hour circular flight known as the Search for Santa.
'I couldn't believe it when they told me to get undressed so they could search me,' he said at his home in Shard End, Birmingham.
'I showed them my police clown identity card, which had my picture next to my credentials as a member of the Criminal Insane Department, but I don't think that really helped.

Dave Vaughan was deemed a security risk when he tried to board a plane dressed as PC Konk
'My plastic scissors and camera got through fine, as did my funny glasses and bubble machine, but then they discovered my toy handcuffs.
'I told them I had bought them from the Early Learning Centre especially for the trip but they still said they were a risk. I suppose they have to be really safety-conscious nowadays, but I've never had this problem before when I've been to international clown conventions abroad.'
Security guards spent ten minutes examining PC Konk's outfit and eventually released him when they discovered his costume featured a metal band which held up his pantaloons - the reason he set off the alarm.
After entertaining the 100 children with his funny songs and jokes on the flight, he was reunited with his handcuffs when the plane landed.
David Dunckly, spokesman for Variety Club Midlands, said: 'It's ridiculous that they needed to strip-search PC Konk right down to his shorts.
'He told us that he normally uses pink fluffy handcuffs, but they have a little bit of metal in, so he thought plastic ones would be safer.
'PC Konk has always been great with the kids and we were all rather shocked when we found out he had been strip-searched in a private room. Thankfully, he was let through in the end - but it's security gone mad.'
Birmingham International Airport's website states that a team of 300 security guards is employed for the benefit of public safety.
Passengers are advised that any sharp or pointed items should not be carried on to planes, or they could be confiscated and destroyed.
But there is no mention of children's toys or plastic handcuffs.
An airport spokesman said: 'PC Konk certainly did a great job of keeping everyone at the airport entertained. However, he was required to give in his handcuffs in line with national security regulations.
'He then passed speedily through before getting on with the important job of putting smiles on the faces of the Variety Club children, who all enjoyed a day to remember.'
Posted by Sam at 8:03 AM