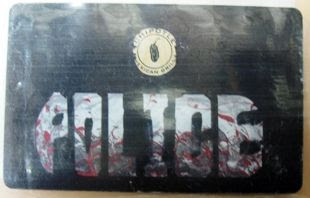 Fake Cop Busted with Very Phony ID Badge
Police in Grapevine say an alert citizen helped them catch a man who did a good job of making his truck look like a police vehicle. He did not, however, do such a good job on the ID badge he was using to impersonate an officer.
Police Sgt. Kim Smith tells 1080-KRLD the man blacked out a Chipotle restaurant gift card with a marker or paint, and then scratched the word, "Police" on it. "The Chipotle emblem and logo was still displayed," Sgt. Smith said.
Officers caught the police impersonator after he tried to pull over a driver on Highway 360. He's now being held on immigration charges.
Posted by Sam at 7:43 AM