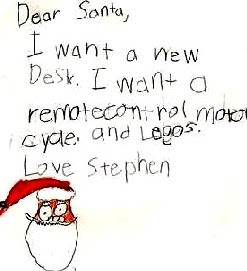 Please help us find and put away more of these folks.

Letter to Santa leads to Pharr man’s arrest
Associated Press -
PHARR — A 9-year-old girl’s letter to Santa Claus asking that a relative stop touching her and her sister has led to the arrest of a 55-year-old Pharr man on charges of continuous sexual abuse of a young child, according to a newspaper report.
Andres Enrique Cantu, 55, of Pharr, remained in the Hidalgo County Jail Monday night after his arrest Friday. His bond was set at $100,000. It wasn’t immediately clear if Cantu had an attorney.
The girl wrote the letter Thursday and turned it in at Cesar Chavez Elementary School, The (McAllen) Monitor reported. It wasn’t clear whether the letter was for a school assignment.
A probable cause complaint said a counselor at the school reported that the student turned in a wish list to Santa asking that the relative stop touching her and her sister.
A day later she was interviewed at the Children’s Advocacy Center in Edinburg, which works with abused children, and told authorities about the alleged molestation. Police investigators believe the molestation occurred over a four-year period, according to the complaint.
The newspaper did not identify the relationship of the man to the girl to protect her identity.
The charge against Cantu is a new one, created by the Texas Legislature last year. It is part of a series of changes to the penal code called Jessica’s Law, designed to heighten punishments of sexual predators.
If convicted, Cantu could face 25 to 99 years in prison.
Posted by Sam at 6:42 AM