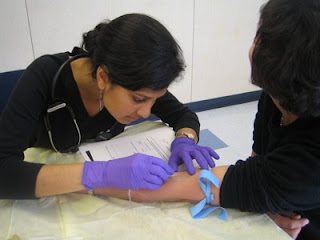 With apologies to blondes everywhere.

On way to give alcohol test, she gets busted herself
Associated Press

CARSON CITY, Nev. — A contract worker for a Nevada sheriff's department is accused of driving drunk to a jail to test a suspect's blood alcohol content.
Fifty-three-year-old Kathleen Cherry told a Carson City sheriff's deputy who smelled alcohol on her breath that she had one margarita before driving Friday night.
She's accused of failing field sobriety tests and registering a blood alcohol content over the state's legal limit of 0.08 percent.
Cherry is a phlebotomist, trained to draw blood for lab tests. She was booked on a misdemeanor drunken driving charge, and her bail was set at more than $1,000.
She declined to comment.
Posted by Sam at 6:57 AM