In the line of duty 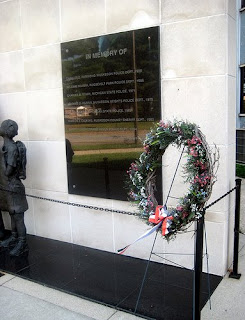 A terrible tragedy in Oakland, California.

My heart goes out to the families and friends of the killed and wounded police officers.

Ladies and Gentlemen of la w enforcement, please be careful out there.

OAKLAND, Calif. (AP) -- A police officer was battling for his life and three more were dead after a parolee with an "extensive criminal history" opened fire at a routine traffic stop and hours later gunned down members of a SWAT team searching for him.

The gunman was also killed Saturday, capping a day of violence that the Oakland Police Department said was the worst in its history. Never before had three police officers died in the line of duty on the same day.

"It's in these moments that words are extraordinarily inadequate," said Mayor Ron Dellums at a somber news conference Saturday night.

The gunman then fled on foot, police said, leading to an intense manhunt by dozens of Oakland police, California Highway Patrol officers and Alameda County sheriff deputies. Streets were roped off and an entire area of east Oakland closed to traffic.

About two hours later, officers got an anonymous tip that the gunman was inside a nearby apartment building.

A SWAT team had entered an apartment to clear and search it when the gunman shot them with an assault rifle, police said.

Sgt. Ervin Romans, 43, and Sgt. Daniel Sakai, 35, were killed and a third officer was grazed by a bullet, police said.

"It is a stunning thing to face," he said.

Grieving officers at the police station hugged and consoled each other. People left four bouquets of white roses under a granite memorial wall inside the building lobby that lists 47 officers killed in the line of duty. The wall shows the last officer killed in Oakland was in January of 1999.

Jordan said Mixon had an "extensive criminal history" and was wanted on a no-bail warrant.

"(Mixon) was on parole and he had a warrant out for his arrest for violating that parole. And he was on parole for assault with a deadly weapon," said Oakland police Deputy Chief Jeffery Israel.

Police said they did not know exactly why the officers initially stopped the suspect, but said it apparently was a routine traffic stop.

People lingered at the scene of the first shooting. About 20 bystanders taunted police.

Tension between police and the community has risen steadily since the fatal shooting of unarmed 22-year-old Oscar Grant by a transit police officer at an Oakland train station on Jan. 1.

That former Bay Area Rapid Transit officer, Johannes Mehserle, has pleaded not guilty to a murder charge. A preliminary hearing is scheduled for Monday. Violent protests erupted on the streets of Oakland in the weeks after Grant's death, further inflaming tensions.

Gov. Arnold Schwarzenegger planned to fly to Oakland on Sunday from Washington, D.C., to meet with police and Mayor Dellums, the govenor's office said.