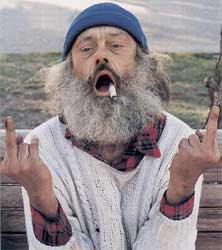 Wow, someone has some major issues.

I guess the Friendly Toast restaurant wasn't friendly, so much, huh?

Man charged with felony after flipping finger
By Elizabeth Dinan

PORTSMOUTH — A Richards Avenue resident is being held on cash bail for a felony charge alleging he displayed his middle finger to someone who had a protection order against him.

Carlos Enriquez, 42, of 177 Richards Ave., is scheduled to be arraigned Monday on a felony charge of violating a protective order and a class A misdemeanor count of stalking. Both charges allege that on Jan. 24 Enriquez held up his middle finger to the victim while both were dining separately at the Friendly Toast, at 121 Congress St.

According to an affidavit by Officer Richard Brabazon, the incident occurred in front of Enriquez’s child and that he eventually left the restaurant “with some assistance from restaurant staff.”

Police Sgt. Kuffer Kaltenborn said violation of protective order charges can be brought as felonies when the allegations are second offenses. However, the city prosecution office is expected to dismiss the felony against Enriquez on Monday, leaving the misdemeanor count of stalking, said Kaltenborn.

Enriquez is being held at the Rockingham County House of Corrections on $7,500 cash and $7,500 personal recognizance bail.