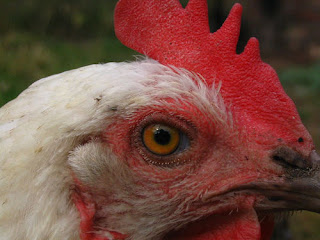 Watch out for the frozen chicken!

I wonder if he'll sue because of a lack of warning labels on the chicken and the store.

Nah, its in Australia, not America.

A thief who used a frozen chicken as a tool to break into a cafe was caught after he cut his wrist and was forced to phone an ambulance, Australian police said.

The man stole the chicken during an earlier break-in at a butcher's shop at Macksville, north of Sydney, but came off second best when he tried to use the frozen bird and some rocks to break into a cafe, slashing open his wrist.

"He thought he was dying," a police spokesman who would not be named told Reuters from Macksville police headquarters.

The 20-year-old man dialled an emergency 000 number to call an ambulance and was arrested shortly after being treated by paramedics, he said.

The man was charged with breaking-and-entering and was due to face a local court in nearby Kempsey later on Wednesday.